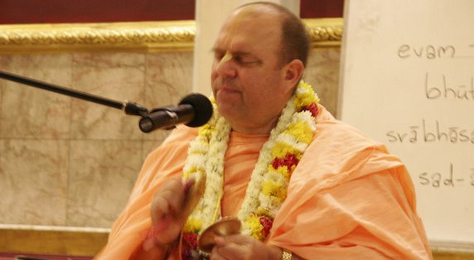 There were 5 other devotees with HH Jayapataka Swami Maharaja in Mayapur. As funds were short, HH Jayapataka Swami Maharaja began engaging in agriculture. He studied several books, learnt different methods and got the best crop. Local farmers were surprised and wanted to learn from him. This helped build a lasting relationship with the local people. Maharaja taught them modern techniques of agriculture and the farmers taught him Bengali. He began to give classes in Bengali where his few listeners would correct him in his language and soon he began to perfect his knowledge of the language. Jayapataka Maharaja had wanted to learn even in 1968 when he was in the West but it did not seem necessary there. His desire was fulfilled automatically when he was sent down to Bengal by Srila Prabhupada.

At Calcutta, Jayapataka Maharaja began to learn Bengali by going out to buy fruits and vegetables. Along with the other devotees, he conducted house programs, organized pandal programs, and personally went out on nagar sankirtan and book distribution though there was so much violence in the city.