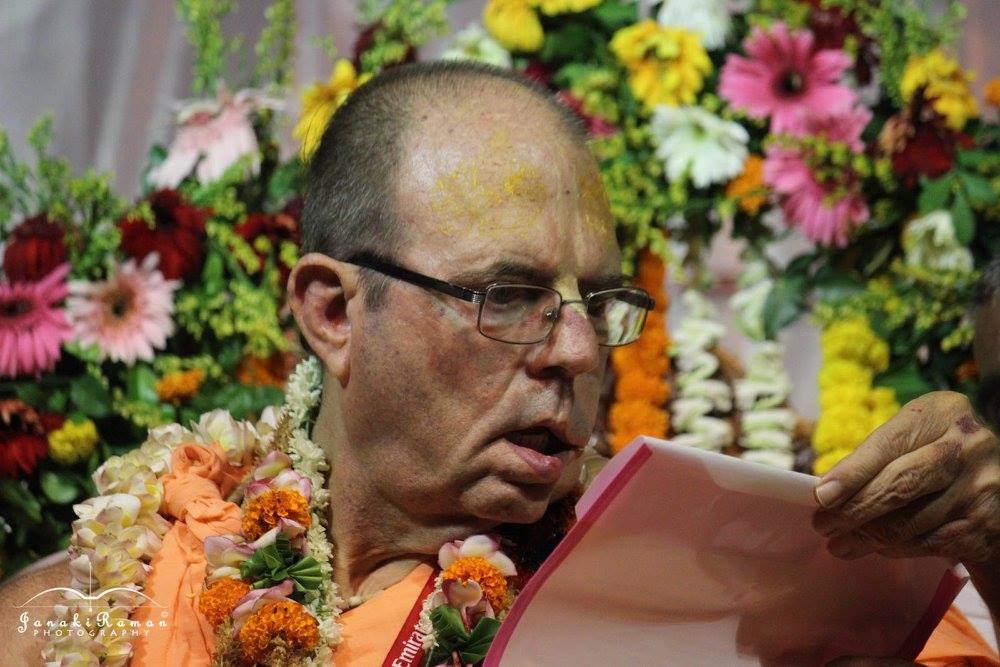 The 67th Vyasa Puja of our dear most Guru Maharaj was celebrated on the 17th of April. The spiritual master being the confidential servitor and representative of Krishna is honored especially on his appearance day. The celebrations at Sri Mayapur were elaborate with every bit of the program a witness to the gratitude towards Guru Maharaj. “What are they, the gurus – doing by accepting all these praises? They do so because they don’t have a choice. Srila Prabhupada and Lord Chaitanya told us to become Diksha and Siksha Gurus. Jayapataka Swami is one of the most brilliant gurus in ISKCON. We are so fortunate to see, to worship such a personality as Jayapataka Swami”, said Rajendranandan Prabhu, Srila Prabhupada’s disciple.

Gauranga Prem Maharaj, senior Sannyas disciple of Guru Maharaj explained that in the Hari Bhakti Vilas it is said that the appearance day of the Lord and the Guru is celebrated with utmost grandeur. He said that the Lord is more pleased when we glorify his devotees and that Vyasa Puja is an occasion that every disciple should eagerly look forward to.

The program:
Guru Maharaj arrived at Sri Mayapur on the 15th of April. Devotees gathered with auspicious items – kalash, coconuts, Ganga Jal etc. There was blowing of conch shells, mridanga and loud Hari Nam. Devotees of the Lord always induce others to chant the Holy Names of Krishna and here it was being practically demonstrated. By being dearly loved by so many, Guru Maharaj through the mercy of Srila Prabhupada engages everyone in devotional service. Guru Maharaj was brought in procession into the temple along with a Murti of Srila Prabhupada. Throughout Guru Maharaj appeared grave and in deep thought. In an address that followed, he spoke in detail about the reception he and other devotees would give Srila Prabhupada when he would arrive in Mayapur. He was absorbed in thought of Srila Prabhupada. “Actually when Srila Prabhupada entered into Mayapur we were mad into ecstasy. When they first saw Prabhupada they would burst some fireworks and then when he came closer the next person who saw Prabhuapda’s car would burst a fire cracker. When he reached the culvert we could see him from the roof of the lotus building and we would turn on the siren, everybody would then know Prabhupada had come. So we would run to the front gate and then from the gate throw flowers.”

On the 16th the Adivas ceremony was conducted invoking all auspiciousness. On the day of the Vyasa Puja Guru Maharaj gave a lecture in the morning. “The ceremony took place at the Pancha Tattva hall, which was packed with over 7000 people. It was humid and hot but that didn’t seem to keep away the devotees. Everybody was eager to see Guru dev. It seemed like they just didn’t get enough of him. Bhakti Purushottama Swami, Bhakti Nityananda Swami, Bhakti Vinodh Swami, Bhakti Siddhantha Swami and Gauranga Prem Swami did the Pada Puja abhishek for Guru Maharaj’s lotus feet. Following that was Guru Puja and Arthik. Guru Maharaj had lunch at the Lotus building along with his God brothers and sisters – sweet, loving, Goloka exchanges.

In the evening devotees who participated in this year’s Safari performed a wonderful drama and dance. It ended with them dancing to the Safari song “Ganga! Ganga! Ganga! Ganga!”. They seemed blissful and captured the attention of the audience. Blissful Vyasa Puja indeed.
“I hope all his disciples take his life as an example and follow his example” – HH Sachinandana Swami (Homage).
“This material world is not for an exalted devotee as Guru Maharaj. It is only by his sweet will and by the sanction of Sri Sri Radha Madhava that Guru Maharaj is here with us today” – Bhakti Purushottama Swami (Homage).

All glories to Srila Prabhupada!