The Power of Prayers

Guru Maharaj’s long standing secretary, Mahavaraha Das writes this for you. Read on. It was in the month of May this year, just 3 months ago that Guru Maharaj faced a very serious health crisis. As Guru Maharaj is back preaching here is an article written by HG Mahavaraha prabhu , underlying the importance of prayer and a series of events that went on in those difficult days.

The Power of Prayers 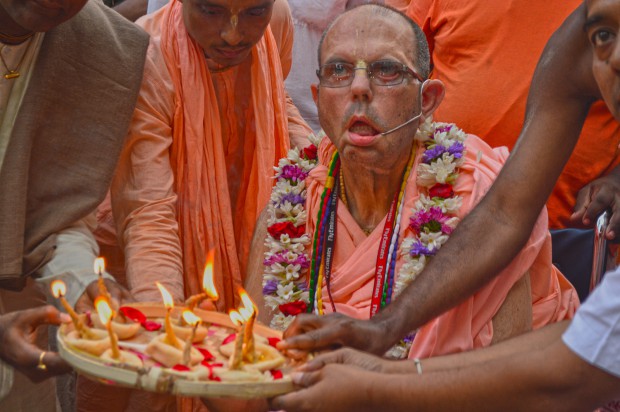 Prayers and willpower are an intrinsic part of the lives of aspiring spiritualists. They form the foundation and crux of the daily lives of individuals of all faiths, whether they be Christian, Muslim, Jewish or Hindu. In fact, the prayers and willpower of devotees are so enthusiastic and determined that we sometimes forget their true potential in our fights against maya. Regardless of our short remembrance, the prayers by sincere devotees establish a direct link with the Lord that, at the very least, convince Him to hear our pleas.

Now let’s just take a step back for a second and ask ourselves, “What is a prayer, anyway”? According to Oxford dictionaries, a prayer is “a solemn request for help or expression of thanks addressed to God or another deity.”

Queen Kunti. Prahlad Maharaj. Draupadi. Gajendra. These divine personalities are without a doubt, exemplary pure devotees of the Lord. But they all had something special in common – their determined, unyielding, intense prayers convinced the Lord to turn His merciful glance upon them in perilous situations that would have otherwise resulted in tragic results.

As we begin to see the first rays of sunshine at the end of this dangerously dark tunnel of HH Jayapataka Swami’s recent health crisis, we may assert that we have witnessed the Bhagavatam and Caritamrta coming alive in the present day.
For a short recap of events: Guru Maharaj was having severe breathing difficulties in Mayapur during the beginning of May. A multi resistant pneumonia caused him to not be able to breathe well. Due to this inability to breathe well, carbon dioxide began building up in his body. Further, due to a weak liver, ammonia gas also began building up. The excess of gases combined with a low breathing power caused his body to become almost unconscious. As per medical science, the aforementioned symptoms would eventually lead to death. Vital parameters could not be stabilized in Kolkata and we experienced a momentary loss of hope. Shortly thereafter, Guru Maharaj was intubated during the wee hours of the morning and airlifted to New Delhi.

Intubation is a procedure in which a pipe attached to a ventilator machine is inserted down the trachea through the vocal chords to assist in breathing. Guru Maharaj was sedated for some days as it is common medical procedure to sedate patients during intubation to help in maintaining patients’ peace of mind and allowing them to sleep well. It is extremely uncomfortable to have tubes inserted all the way down one’s throat. After about a week of the intubation, the doctors noticed that Guru Maharaj’s sedation was weaning off and he was becoming alert and active. Seeing these positive signs, they decided to remove the pipe (known as an extubation). After extubation, he was still kept in the ICU for a few days. On the 26th of May, Guru Maharaj was shifted to a private room. However, within a day-and-a-half, his breathing drastically dropped, again. He had failed the first attempt. Thus, he was moved back into the ICU and was sedated and intubated. All our hopes crumbled. The hospital doctors, our in house doctors, and the caretakers were so worried. There was a big question mark hanging on the top of our heads. We, the caretakers and the senior disciples team of Guru Maharaj, decided that we should announce Guru Maharaj’s precarious and fragile health condition to the GBC Body and the ISKCON World. That same day, the GBC Executive Body sent out a message in the social media about Guru Maharaj’s perilous condition and requested devotees to intensify their prayers. This time, Guru Maharaj was intubated for a longer time to ensure that he would be able to breathe on his own, using his own lungs. After a few days, Guru Maharaj became more alert and active, but he was still very much dependant on the ventilator to breathe. The hospital doctors became even more cautious at this time. They gave their very best in their treatment of Guru Maharaj.

3rd June, 10.30 AM: Due to the risk of infection of having a tube inserted down one’s trachea for so long, Dr. Sarin decided that it would be best to have the ventilator removed and have a tracheotomy performed. A tracheotomy is a minor surgical procedure in which an incision is made through the trachea to allow for a tube to be inserted which assists in breathing. However, reactions to this decision turned out to be completely unexpected, especially from Guru Maharaj’s side; Guru Maharaj has undergone this same surgery, twice. Dr. Sarin, himself, was not happy from the very beginning and hesitated to give this tracheotomy option to Guru Maharaj because he was afraid that Guru Maharaj’s voice could be affected. He knows very well that preaching is Guru Maharaj’s life, which obviously involves lots of talking. But you’ll see below how it all played out, below.

5th June: From the morning onwards, Guru Maharaj, Dr. Pritirupini and the caretakers had meetings with Guru Maharaj, meticulously going through the pros and cons of having the tracheotomy done. The ICU head doctor, Dr. Lalita, was explaining all of the medical textbook justifications and reasons regarding why it was essential for Guru Maharaj to have the tracheotomy, especially having failed the first attempt at extubation. However, Guru Maharaj was still not convinced. Dr. Lalita clearly explained how if it were another patient present, there would have been no choice; they would have immediately gone for the tracheotomy. However, she said that given Guru Maharaj’s determination and him being a divine person, she would give him a second chance. During the evening, Dr. Pritirupini, Dr. Acyutananda and Guru Maharaj had a skype conversation with and a top doctor from Atlanta, Dr. Anand Deval. He was explaining all the pros and cons of having the tracheotomy performed. However, even after all these discussions, Guru Maharaj still refused to have the procedure done. His willpower was just unshakeable. He wanted to have another chance to breathe on his own without the ventilator and without the tracheotomy too.
Then, the doctors finally had to agree to Guru Maharaj’s desire and they extubated him. But all the doctors said that if he was unable to breathe, then they would go for the tracheotomy straight away. During the midnight hours of June 6th, the first night after removing the pipe, Guru Maharaj’s carbon dioxide levels increased and they put on the gigantic Cpap mask which regulates the breathing pattern. Fortunately, the carbon dioxide levels became controlled. For the first few days and nights, we all had our fingers crossed. There were so many ups and downs. By the fourth day of this second attempt of extubation, Guru Maharaj’s breathing had gradually improved. Doctors were shocked to see an overturn of medical theory. 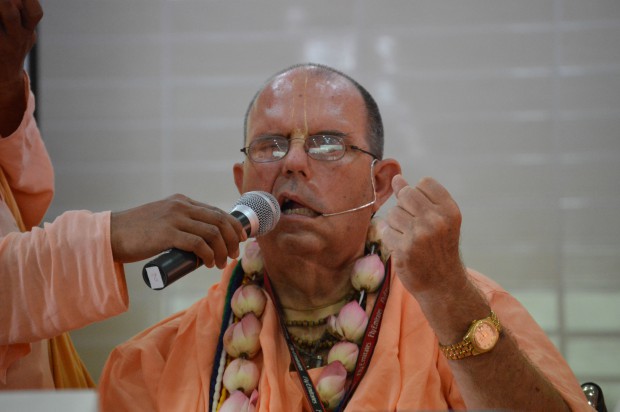 Devotees were ecstatic to witness the progress he was making. Guru Maharaj was calm and composed, determined to continue on in his service to Srila Prabhupada.

From the very beginning of this health crisis, the JPS correspondence team has been continuously providing updates on Guru Maharaj’s health condition and encouraging devotees to pray for him by inundating the social media. Thousands of devotees and even non-devotees have spontaneously prayed for Guru Maharaj. So just if you’re curious: Within a month, post the health crisis, Guru Maharaj has received over 1000 emails from all over the world, including countries such as Ghana, Estonia, Northern Ireland, Bosnia, Uganda, and Iran, with devotees reporting their extra services dedicated for his fast recovery. Collectively, over 99,000 extra rounds of the Hare Krishna Maha Mantra and over 411,000 recitations of the Narasimha Kavacha and Ugram Viram Mantras have been chanted. Nearly 400 hours of kirtan were performed and over 3000 books were distributed. 790 devotees were reported to have observed full Pandava-Nirjala Ekadasi fasting and many devotees also reported having done special fire sacrifices and home programs. Please keep in mind that these reported statistics are only those extra devotional services that devotees chose to report! There are still many unreported services that have been dedicated to Guru Maharaj. Further, with this month being Purushottam Adhika Masa, devotees are performing even more devotional service and preaching dedicated to Guru Maharaj’s quick recovery.
Guru Maharaj has expressed his heartfelt appreciation for all your extra services on numerous occasions. It is undoubtedly clear that intense prayers and Guru Maharaj’s determined will power combined with the doctors’ skilled efforts and Krsna’s divine intervention have brought him to this current stage after this health crisis.
Clearly, the power of prayer is inconceivable. It is best explained by Guru Maharaj, himself – “Prayer is a very important activity we have. It is a private talk between the devotee and the Lord. It also helps us to establish our personal relationship with Krishna because we are praying to Him, as that is our communication with the Lord.”