In 1977, as Srila Prabhupada’s health was getting worse, he once asked Jayapataka Maharaja “What does your astrologer say?” and Jayapataka Maharaja mentioned “that there was an astrologer in Mayapur who had read Prabhupada’s horoscope to Bhavananda along with all of our Society’s leaders about two weeks ago. This man said that Prabhupada was a kind of avatara especially empowered by God so that he was free to choose whether to come or go. As far as his future predictions went, he said that Prabhupada’s present illness would go by November 28 when Venus entered another house, that he would take another month to recuperate, and that there would be no further illness for seven years.(from TKG’s Diary)

Though all the devotees were hopeful that Srila Prabhupada would recover, His Divine Grace left the planet on November 14, 1977. Earlier, HH Jayapataka Swami Maharaja was one among the eleven named by Srila Prabhupada to give initiation on his behalf when he was seriously ill.

Based on Srila Prabhupada’s personal instructions about how sannyasis are authorized to accept disciples when their spiritual master is no more present, following in the teachings in Srila Prabhupada’s books that initiation is given by one in the current link of the disciplic succession;

Brahma is the original spiritual master for the universe, and since he was initiated by the Lord Himself, the message of Srimad-Bhagavatam is coming down by disciplic succession, and in order to receive the real message of Srimad-Bhagavatam one should approach the current link, or spiritual master, in the chain of disciplic succession.

And the confirmation in his letters that: Generally the spiritual master comes from the group of such eternal associates of the Lord; but anyone who follows the principles of such ever liberated persons is as good as one in the above mentioned group. (Letter to Janardana New York 26 April 1968)

His Holiness being a senior sannyasi disciple of Srila Prabhupada has also awarded sannyas initiation to 14 devotees so far:

I offer my obeisances to Srila Prabhupada! So, everyone when they take initiation, as Srila Prabhupada provided they take vows to follow the four principles and to chant 16 rounds. There is one additional thing. We ask the disciples to commit that they will help me, fulfil Srila Prabhupada’s mission, his instructions to me.

“I went to your country with a mission and you all good souls were sent by Krishna to me.” – Srila Prabhupada. 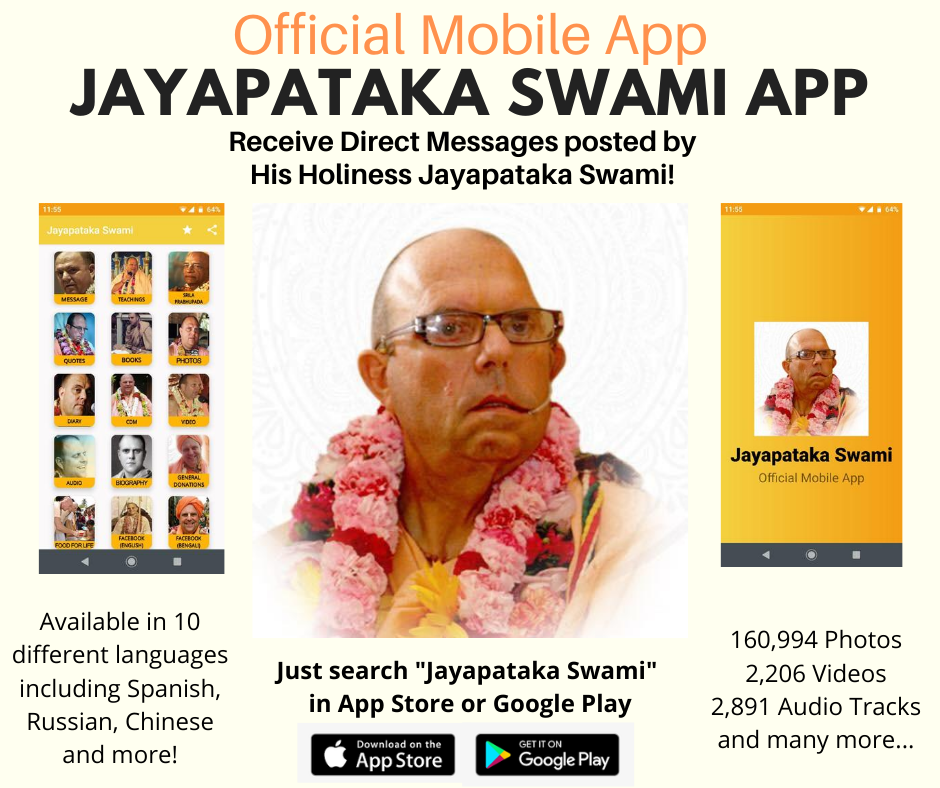