Vijaya Dasami is the victory of Lord Rama over Ravana. Ravana was the personification of lust and he had conquered the three worlds. He had a boon that he could not be killed by devas or daityas but since he was a raksasa, he would eat humans and animals so he didn’t bother getting a boon to protect himself from humans or animals. Krsna came in the form of a human being as Lord Rama and Balarama came as Lord Laksmana, Rama’s younger brother. Rama was banished to the forest for 14 years by his father, fulfilling the wish of his second wife, Kaikeyi, to whom he had promised to give two boons. So she said that the first boon is to banish Rama for 14 years to the forest and the second boon is to coronate her son Bharata. Bharata and all the citizens of Ayodhya loved Lord Rama. Bharata told Kaikeyi that you are no longer my mother. He said, “You may be my queen as you are married to my father but you are not my mother.” Since Rama was banished to the forest, Bharata voluntarily lived outside of Ayodhya in a small village setting and put Lord Rama’s shoes on the throne; Rama was the real king, and he was overseeing the kingdom on behalf of Lord Rama. The city of Ayodhya is still there today and the river Sarayu is still there. Lord Rama went to Citrakoot and stayed there for many years. That is a very beautiful place. There, He also lived in a cave with Sita and Laksmana and there was a bathing place where Sita would bathe, called Sita Kunda. We went to these places on our Safari. Later, Sita was abducted by Ravana and taken to Sri Lanka. Rama found out from Jatayu that Sita had been abducted by Ravana. Rama met Hanuman who took His ring and went in search of Sita, whom he found in Lanka. She was being tortured by raksasis, female demons. Then ensued a big war between Rama, Laksmana, the army of monkeys and Jambavan on one side, and Ravana and his elite army on the other. Today is Vijaya Dasami, the Victory Dasami, the day that Rama defeated Ravana. May all victory be there among the readers! 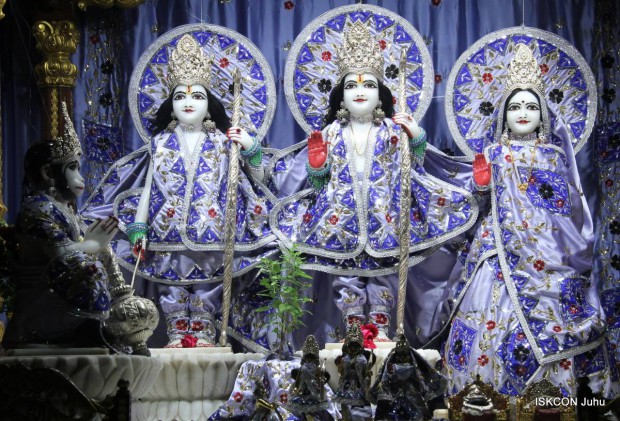