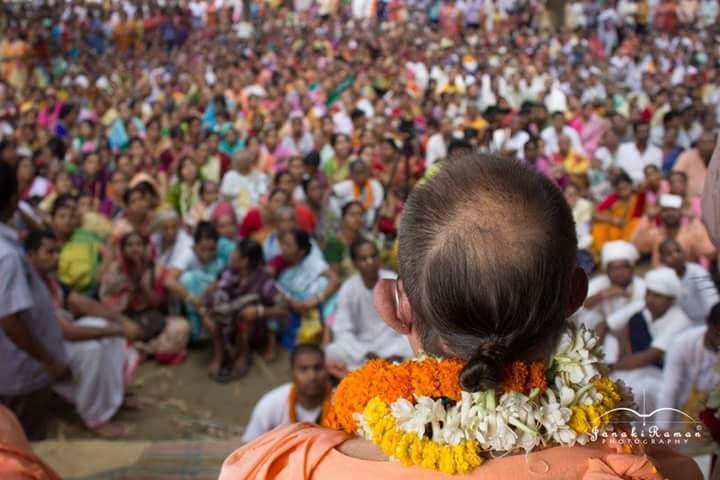 Guru Maharaj attended the Shantipur festival on the 21st. There was something so special and unique about it. Over 50000 people attended the festival and honoured Prasad. “Advaita acharya celebrated this festival on the disappearance day of his spiritual master. Lord Chaitanya was so impressed with the festival that he wanted it to continue and also declared that anyone who eats Prasad at Shantipur on the same tithi will surely attain Govinda Prem”, said Guru Maharaj in his address.

Guru Maharaj was speaking in Bengali with over thousands listening to him keenly. There was ulu dwani, hari dwani it was estatic. “Don’t forget to serve prasadam here and get Govinda prem”. Advaita acharya’s desendentans who now take care of the temple at Shanthipur were expressing their gratitude to ISKCON for supporting the festival and feeding so many people. “I am very grateful to Srila Prabhupada for ISKCON and also to Jayaptaka Swami Maharaj. For so many years now we are having such a wonderful relationship with him. We pray to Sri Krishna to give him good health and long life so that he may always attend the Shantipur festival and grace us and continue his preaching”. It is amazing to see how Guru Maharaj has established such loving relationships with them and the genuine appreciation they have for Guru Maharaj.

All glories to Srila Prabhupada.