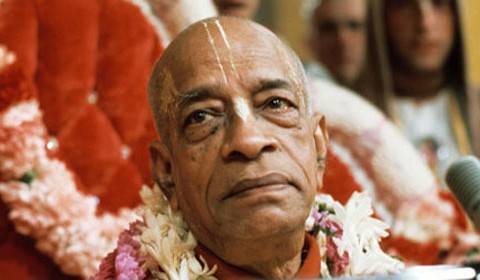 Today is the Disappearance day of
His Divine Grace A.C. Bhaktivedanta Swami Prabhupada

We believe that this description of Sri Caitanya Mahaprabhu’s pastimes also holds true for the activities of Srila Prabhupada, the great Acharya, spiritual teacher in disciplic succession from Lord Caitanya who created the world movement of Krishna consciousness beginning in America in the 1960s. We know that just as one worships the Ganges river by an offering of Ganges water we can glorify Srila Prabhupada only by his own mercy.

Since we are his disciples, his mercy is all we are made of.Have you ever seen an avalanche? An avalanche starts in a small way. Sometimes one little bit of snow or dirt will just start to roll, and as it’s rolling, it hits other pieces and they also start to move, and the subsequent movement becomes bigger and bigger, and from a small particle, to hundreds of particles, to thousands of particles to a few tons of material, it starts to roll and gain momentum. In this way, as the avalanche gains its speed, then finally the whole mountain crushes down in a huge landslide.

So, in the same way Srila Prabhupada has started the flood of love of Godhead. He started it and he is nurturing it. He is nourishing. Simply, we are pebbles. We are insignificant particles of dust, simply taking part in this massive landslide which will completely free all the loose particles from the fixed up position, this material world, down, down into the ocean of bliss. Srila Prabhupada is the “Senapathi Bhakta” who was predicted in the scriptures.

We should remind ourselves and commit ourselves to dedicate to the lotus feet of Guru and Gauranga, following in the footsteps of Srila Prabhupada to spread this message which he has brought with such care and affection and compassion so that everyone can benefit, that is the service we can do to offer to Srila Prabhupada. Also, Srila Prabhupada said that, “Preaching is the essence and the books are the basis.”