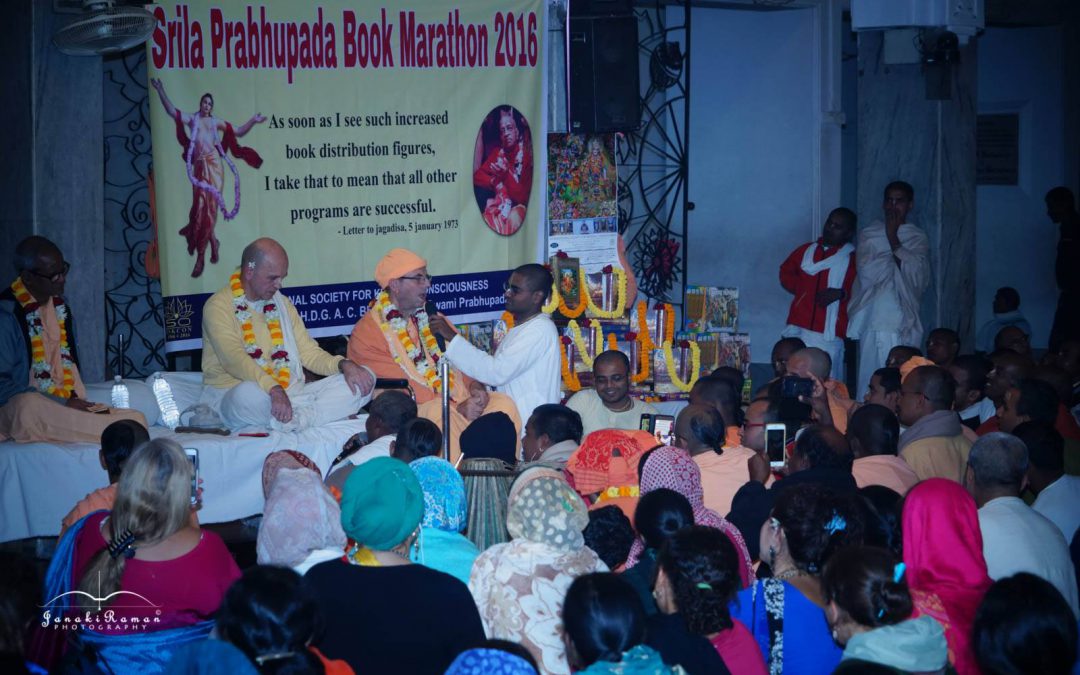 “So our whole community should unite to fulfill this for the satisfaction of Srila Prabhupada”, said Guru Maharaj in his address. He stressed on the fact that distributing Srila Prabhupada’s books is a very important way to please Srila Prabhupada. Bhakti Purushottama Swami remarked that in the past two years Mayapur has stood number one in Book distribution and that Guru Maharaj was personally calling the Sankirtan Devotees , even from his hospital bed and encouraging them to distribute books.

HG Hridaya Chaitanya Das narrated an incident were in butchers who were having a celebration on Christmas eve, actually received the mercy of Sri Krishna through a devotee who was distributing books.Gopal Krishna Goswami Maharaj spoke about the potency of Srila Prabhupada’s books and the bliss one derives by distributing them.

Please find below the address given by Guru Maharaja:

“Here we are in Mayapur dham, Srila Prabhupada said that Mayapur is the spiritual headquarters. Here, Sri Chaitanya Mahaprabhu has descended from Goloka Vrindavan. He was known as Vachaspathi. As Vachaspathi he was the husband of Lakshmi and expert in speaking. He would tell everyone to chant the holy name. In his hand he would always carry shastra.

Those days people didn’t have books, but they were very intelligent so they would realize the Shastra. You know people today are not so intelligent, they have to read the books again and again. Therefore books are very important.

So we are very grateful for the speakers. They have said so many nice things, how we have to serve Srila Prabhupada, how this is the modern day Yagnya, how by doing this Sankirtan Yagnya,it is Raghanuga Bhakti , how we can help the people who are otherwise deprived of this mercy, how Krishna helps every book distributor and how he performs miracles and that story by Hridanya Chaitanya, who were those people ? The butchers! The butchers of the city had a function exchanging presents on behalf of Santa Claus. The butchers, they received Bhagavat Gita and other literature. How Lord Chaitanya is distributing his mercy to the conditioned souls, through these literatures.

In the Shastra it says even if there are some defects we give out these transcendental literatures, spreading the lords special mercy. Srila Prabhupada’s Bhagavatam that was the first to be taken to the United States. Srila Prabhupada brought these cases of Bhagavatam and it has such a lasting effect. So, our while community should unite to fulfill this for the satisfaction of Srila Prabhupada. Our sankirtan devotees go out and they meet the people on their own places. So like that they are certainly taking big risks. Some devotees ,they go to Kolkata, some have book table here. Everyone , we should put out our maximum energy. This Sankirtan yagnya is a special way we can satisfy Srila Prabhupada. I am very grateful to the devotees and their efforts in the next months. The Delhi temple has 2500 devotees who participate in the marathon. So we need to also have all our devotees, back up the Sankirtan devotees and distribute books. All over India there is demonetization. So that problem is these for everybody. It’s not only our problem.

We heard how Prabhupada tried to carry out the order of his spiritual master and how he tried his best to please his spiritual master. So we want to please Srila prabhupada , we would like to remember all the lessons given by the senior devotees here and be inspired for the next two months,we are very very grateful that the BBT devotees and Sankirtan devotees are working hand in hand. So before the deities, we pray for their mercy.”