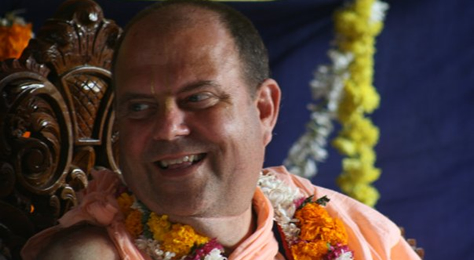 As he was preparing to leave for India, he met the devotees of His Divine Grace A.C. Bhaktivedanta Swami Srila Prabhupada, founder acarya of the International Society for Krishna Consciousness, doing kirtan and distributing BTGs at the park. When one devotee approached him to take a copy of the BTG, he was stunned to see the tilak on his face and experiencing some strange feelings he began to run. After running a few minutes, he stopped to contemplate on what he had seen and how he had been so much affected. It was the experience of seeing something after a long time, a re-awakening of something that had been dormant and hidden from his memory. He walked back to the park but by then the devotees were gone!