Today we continued with Lord Caitanya’s pastime in Śrīraṅgam, Tamil Nāḍu, South India. Lord Caitanya was explaining to Veṅkaṭa Bhaṭṭa about the supremacy of Lord Kṛṣṇa over Lord Nārāyaṇa. That one has to purify the consciousness and do it internally to follow the gopīs to worship Kṛṣṇa.

The Śrīmad Bhāgavatam states that Kṛṣṇa is the Original Personality of Godhead and Nārāyaṇa and other forms of Godhead are His expansions, or the expansions of His expansion. Also, Parāśara Muni, the father of Vyāsadeva, did a study and said, Kṛṣṇa has 64 qualities, Nārāyaṇa and other Viṣṇu avatāras have 60, Lord Śiva has 55 and Brahmā and other living entities have a maximum of 50. There is only one Supreme Personality of Godhead but He manifests in different forms to reciprocate with the bhava of each devotee. And the forms of the devatās cannot be compared with the forms of Nārāyaṇa or Kṛṣṇa. 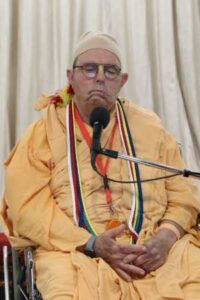